Ultrasound imaging allows the evaluation of the degree of emergency of a patient. However, in some instances, a well-trained sonographer is unavailable to perform such echography. To cope with this issue, the Mobile Tele-Echography Using an Ultralight Robot (OTELO) project aims to develop a fully integrated end-to-end mobile tele-echography system using an ultralight remote-controlled robot for population groups that are not served locally by medical experts. This paper focuses on the user interface of the OTELO system, consisting of the following parts: an ultrasound video transmission system providing real-time images of the scanned area, an audio/video conference to communicate with the paramedical assistant and with the patient, and a virtual-reality environment, providing visual and haptic feedback to the expert, while capturing the expert’s hand movements. These movements are reproduced by the robot at the patient site while holding the ultrasound probe against the patient skin. In addition, the user interface includes an image processing facility for enhancing the received images and the possibility to include them into a database. 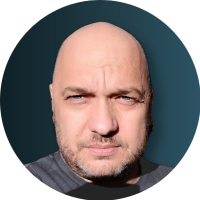